Springtime in Japan is famous for a variety of beautiful flowers. One of them is the Japanese wisteria, a flower that captivates with its mysterious beauty and its sweet fragrance. Like wisteria’s more famous cousin the cherry blossom, multiple varieties of wisteria bloom at different times.

The average blooming period extends from mid-April to early May. The characteristic color of the wisteria is purple, but they are also found in other colors such as pink, yellow and white. Make sure to check out this unique spectacle as you walk under pergolas across Aichi and gaze at these beautiful hanging flowers.

The Wisteria Flower a Protagonist in History and Culture

The wisteria is originally from China and has existed for more than 2,000 years in a number of Asian countries. The beauty of this flower has attracted Japanese poets and artists and occupies an important place in Japanese culture. One of the most famous Kabuki dances “Fuji Musume” (The Wisteria Maiden) focuses on wisteria flowers as a symbol of love.

The wisteria has also made its appearance in classical Japanese literature, such as in the poetry collection Manyoshu where we find short poems called Waka that speak of scenes related to the wisteria and its flowering.

The color purple has always had a special meaning in Japan. About 1,400 years ago only high-level officials and the Imperial Family could wear purple clothes, showing both its importance and exclusivity.

Discover the Best Places to See the Wisteria Flowers in Aichi

Every year in Japan around the first week of May is a collection of four National Holidays that fall within a span of seven days creating a “Golden Week” (as it is called) of holidays. This week coincides with the blooming period of wisteria, and the Japanese hold numerous festivals to celebrate it.

In Aichi, there are 6 magnificent places where you can immerse yourself in the beauty of the wisteria flowers. Check them out!

Just north of Nagoya Castle is a large park called Meijo Park. Connecting them is a 660-meter long wisteria corridor that extends from the East Gate of Nagoya Castle to the southern corner of Meijo Park. Nine varieties numbering 85 trees make for a beautiful walk between the castle and the park.

This is a must-see if you are visiting Nagoya Castle in early May.

Meijo Park Wisteria Corridor (名城公園藤の回廊)
Best Time: From the end of April to early May
Entry Fee: Free
Opening Hours: Open 24 hours
Address: 1-2 Ninomaru, Naka Ward, Nagoya, Aichi 460-0032
Access: Take the Meijo subway line and get off at Shiyakusho Station. It is a 3-minute walk from exit 7 to the East Gate of Nagoya Castle and the start of the Wisteria Corridor.
Website | Google Maps

Tennogawa Park is located around a large pond in Tsushima City. Its Wisteria Festival is celebrated from the end of April to the beginning of May.

The park has 12 different varieties of wisteria and around 115 wisteria trees. During the wisteria festival, there are numerous food stalls and lots of events going on around the park. In addition, you can have Matcha (green tea) with a Japanese sweet under the incredible wisteria flowers. Be sure not to miss the wisteria when they are lit up in the evening.

Tennogawa Park (天王川公園)
Best Time: From the end of April to early May
Light Up: 18:00 – 21:00
Entry Fee: Free
Opening Hours: Open 24 hours
Address: 1 Rurikojicho, Tsushima, Aichi 496-0856
Access: Take the Meitetsu Tsushima line to the Tsushima station. It is a 15-minute walk to the park.
Website (Japanese Only)| Google Maps

Mandara Park, located next to the Mandara Temple (founded in the 14th century), is well known for its colorful wisteria. Approximately 60 wisterias of 12 varieties cover the park in purple, pink and white.

The Konan Fuji Festival is held each year during the wisteria season with food stalls and events, but in 2022 due to COVID-19, it has been canceled. The park is open to visitors.

The park is also home to roughly 200 peonies which also bloom at the same time as the wisteria.

In the center of Okazaki, Okazaki Park surrounds Okazaki Castle and the Mikawa Bushi Ieyasu Museum. The park is famous for being one of the best places in Aichi to see cherry blossoms. But not only cherry blossoms but also the wisteria trees called Gomangoku Fuji draw crowds each year. It is said that these flowers once adorned the entrance of Okazaki Castle, and were later transplanted to the present location.

The wisteria flowers cover the 1,300 square meters of the complex creating an impressive purple landscape. Don’t miss the light-up during the wisteria festival.

The wisteria flower is the official flower of the city and Gomangoku Wisteria is designated as a cultural property.

If you want to know more information about Okazaki before your visit, make sure to read our Okazaki City Area Guide.

The Koto Garden, with about 1,000 square meters, was built around 1820. The garden houses two types of wisteria. The first, called Hiro no Nagafuji, has branches with purple flowers up to 1.5 meters long. The second, called Daruma Fuji is a flower with a sweet and soft fragrance.

The Kotoen Fuji Wisteria Festival with its beautiful night illumination of the garden is another highlight.

Koto Garden (広藤園)
Best Time: From the end of April to early May
Festival Period: 2022 April 16. – 2022 May 5.
Light Up: 18:00 – 21:00
Entry Fee: Free
Opening Hours: Open 24 hours
Address: 3-36 Nihongimachi, Hekinan, Aichi 447-0029
Access: Take the Meitetsu train to Chiryu station, then change to the Mikawa line and get off at Kitashinkawa station. Take the free Kurukuru Bus to the Hirofuji Garden West stop. From there it is about a 30 minute walk.
Website | Google Maps

Located in the aptly named Fujioka area (Wisteria Hills) of Toyota City, the Fuji no Kairo is a 370-meter corridor consisting of four different kinds of beautiful wisteria-covered pergolas. The path leads to the site where Mitsukuri Castle is said to have once stood.

Make sure you read our Toyota City Guide to know more about what to do in the birthplace of Japan’s most famous automobile manufacturer.

Fuji no Kairo (藤の回廊)
Best Time: From the end of April to early May
Entry Fee: Free
Opening Hours: Open 24 hours
Address: Tatchu Mitsukuricho, Toyota, Aichi 470-0424
Access: Public access can be a little difficult so we advise going by rental car or with a local guide.
Website (Japanese Only) | Google Maps 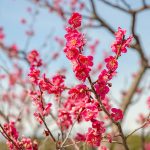 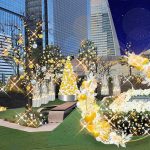