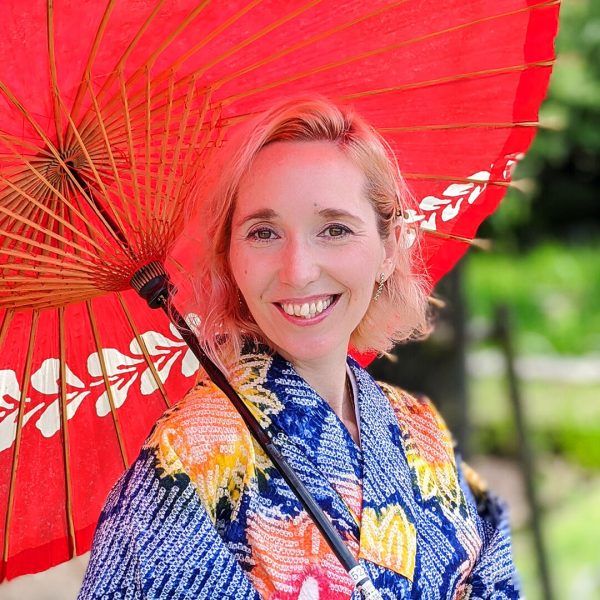 Elisabeth, born in the resort island of Mallorca, in Spain.
She began her career as a web and graphic designer.
Curiosity about Asian history took her to start studies in Asian History and the China Dynasties. This rapidly took her to an increasing interest in Japan History.

Her first direct contact with Japan was in 2004, during a 2-weeks trip visiting the main cities and attractions of the land of the rising sun. During this trip she discovered not only the beauty of Japan, but also the reason that would bring her back again to the country: Japanese design. She returned to her country home and decided to study Japanese design in Japan. Preparation for the journey took a couple of years. During this time she met her future husband. And when everything was ready she quit her job in Spain. And finally in April of 2007 she and her future husband were able to move to Japan.

She spent 2 years in a Japanese Language Institute in Okazaki called Yamasa Institute, learning Japanese language and immersing herself in a full-time Japanese language experience. After graduating from Yamasa Institute, she began a hard odyssey to find a job during the economic crisis that was hitting the globe. Finally, in April 2009 she got a position as a web designer and web developer for  a tourism related Japanese Company in Nagoya.

She worked 8 years in this company, which has offices all around the country and overseas. And she was the only foreigner among the Japanese staff!
She worked creating content to attract tourism to different places in Japan, in Japanese language and other languages such us English, Chinese and Spanish.
After 8 years, she decided to change the course of her career and became a freelancer, specializing in inbound tourism.

In 2018 she started with her own project called Kawaii Aichi as a blogger, introducing the Aichi Prefecture to other countries. Because Aichi is almost an unknown region for foreigners, she wanted to do something to increase knowledge about it.
She went to a lot of different places around Aichi prefecture trying to capture everything that she saw, heard and experienced. So that later, she could express those experiences with words and images.

In 2019, she came up with a new project, “Nagoya is not boring”. By that time, thanks to a friend of hers, he met Lena, Nagoya’s foodie guide tour. It did not take more than a few months later for them to put together their passion for Nagoya to start this exciting new project.

They released “Nagoya is not boring” website in mid-april of the 2020.

In 2021, she became the co-founder and CEO of “Nanobo inc”, an inbound tourism related consulting company based in Nagoya.

Co-founder and CEO of “Nanobo inc”, an inbound tourism related consulting company based in Nagoya

Co-founder and CEO of “Nagoya is not boring”, an experience and tour reservation platform for foreigners based in Nagoya

Working in Spain as a Web and Graphic designer