There is a lot of misunderstanding as to what exactly a Geisha is, and although the image of Geisha may have been able to shed a lot of these misconceptions over time, many may still associate Geisha with the idea of “comfort women”, which they most certainly are not. We’d like to guide you through some of the history of the Geisha and banish some of those myths to where they belong.

First and foremost, as we like to focus on Nagoya here at “Nagoya is not boring”, although Geisha are most often associated with Kyoto, the most infamous of “traditional” towns in Japan, they are most certainly not exclusive to that area. Nagoya itself has a very rich history of Geisha tradition, which we would like to introduce to you.

The Origins of Geisha

Japan throughout its history has always offered several forms of entertainment related above all else with pleasure and eroticism. You only need look at some of their medieval artwork (Sunga) to know that the Japanese did not shy away from expressing their desire for the human figure. Even a lot of modern day animation shows testament to that! The role of the “entertainment woman” in medieval times has played a very important role in history, in which the Geisha has often been misrepresented.

The first historical records of “entertainment women” are found during the Nara Period (around the seventh century AD) with the Saburuko. There were two kinds of Saburuko divided by class:

During the Heian (794-1185) and Kamakura (1185-1333) eras, courtiers spent much of their time preparing and participating in religious ceremonies and festivities. These occasions often demanded the presence of female artists. It was here that the Shirabyoshi emerged. Women highly qualified in the arts of music, dance and poetry, occupied a small but significant position in the history and fiction of the time.

The Shirabyoshi were educated women who could read and write, and whose primary form of entertainment was dancing, singing and poetry. Although women, they dressed in traditional male attire and became desired figures because they evoked the sexualized male image.

Their job was to entertain, and many of them became legitimate wives of aristocrats and high-ranking warriors. Among the most famous Shirabyoshi is Shizuka Gozen, lover of Minamoto no Yoshitsune, one of the greatest and most famous warriors in the history of Japan.

During the Edo Period, Japan closed its doors, cutting off all contact with the outside world. This is now known as Sakoku (locked country). Many merchants benefited from the peace and prosperity of a closed Japan and became extremely wealthy. But the strict social hierarchy prevented them from using their wealth to improve their status or acquire political power, so they channeled much of their money towards social rituals, the pursuit of pleasure and the acquisition of beautiful and often expensive objects.

In its early form, the world of Geisha (known as Karyukai) was to provide a service to entertain and enchant, working together with the desired courtesan, called Oiran.

As the Oiran provided services exclusively to the higher echelons of society, the merchants looked for other types of entertainment, which included music, dance, and poetry. In what now we would call “filling a market gap”, it is here when the first Geisha appeared on the scene. And surprising as it may seem the first Geisha were men, called Taikomochi or also Hokan. These Geisha men began working in brothels, entertaining the guests with music, cheerful conversation, and comic games before the Oiran made her appearance.

It would not be until later that Geisha women joined the service. These Geisha women were strictly regulated by the government and had rules not to eclipse and “steal” the clients of the courtesans. Hence, the dress of the Geisha as we know it today, is so simple and inconspicuous. Many Geisha would even work outside of the pleasure districts.

How Did the Geisha Come To Prominence?

As the popularity of the Oiran courtesans diminished towards the end of the Kamakura era, the entertainment of the Geisha became increasingly popular.

Finally in 1956, with the prohibition of prostitution throughout the country, the pleasure districts were abolished. The courtesans lost their jobs, but the Geisha, purely acting as musicians and dancers, survived to this day.

The Geisha nowadays are guardians of the traditional arts of Japan and spend all their life mastering classical music, dance, games, and conversation.

Where to Experience the Meigiren in 2022?

Even today there is the erroneous image that Geisha only exist in Kyoto. Perhaps it is merely misinformation, or rather the intention to continue promoting Kyoto as the place to visit to experience traditional Japan. Whatever the reason, the truth is that the Geisha and Maiko (dancing girls) are not exclusive to Kyoto!

Geisha and Maiko exist in other regions of Japan such as Tokyo, Yamagata, Fukushima, Niigata, Ishikawa, Shizuoka, Fukui, Akita and of course most importantly Aichi. Each region has its own group or association of Geisha and Maiko making representations in private parties, banquets, religious celebrations, and public events.

In Nagoya, you can find the Meigiren (Nagoya Geigi Association), an association founded in 1952, that currently has 19 Geigi (a word used in the beginning of the Meiji period instead of Geisha, now combining both Geisha and Maiko).

Nagoya Geisha offer performances at different public events such as at the Nagoya Odori dance performance event held on the 15th and 16th of October 2022, or at the Nagoya culture festival Yattokame held between the 22nd of October and 11th of November 2022 where the Geigi will make an appearance during one night of games and entertainment.

On September 16. and 17. 2022 the Meigiren Festival will be held at the Nagoya Noh Theater. A chance to see the Geiji dance and sing in a beautiful traditional stage performance.

The Nagoya is not boring team had the great opportunity to chat and interview Meigiren’s boss, Hitomi-san and one of the Geisha, Hikono-san, who gave us great insight into the life of a Geisha.

Like all Geisha and Maiko, those at Meigiren have a strict daily routine. Every morning they have dance training, Shamisen (a traditional Japanese string instrument) training, and singing practice. They usually rehearse from 10:00 in the morning until around 15:00.

Once the training is over, they take a short break for lunch and return home to prepare for the evening performance. To prepare, the Maiko go to the house of their Onee-san (Geisha mentor) so she can help put on the Kimono, makeup and groom her hair.

The beginning of the day depends on the type of performance of that day. If they are performing in a banquet, the workday begins around 5 in the afternoon. If it’s a nighttime performance, they start around 9 at night. They usually work until late into the evening, although sometimes they can finish around 21:00 if they’re lucky!

How Is Meigiren Different to Other Geisha Groups?

The Geisha, ​​according to the region, differ as much in their style of dance as in their lifestyle.

One of the big differences of Meigiren, with respect to other groups of Geisha, ​​is that they don’t have their own Okiya (Geisha house). This means that, on the one hand, they don’t all live together in the same place, but on the other hand, they have to cover all the costs for Kimonos, wigs (and their maintenance), makeup products, rehearsal classes, etc.

Other differences are the characteristic Meigiren dance styles. This dance style is influenced by the Japanese classical dance school Nishikawa Ryu, one of the most prestigious in Japan, along with singing “Nagoya Jinku” (Nagoya folk songs). And finally, doing the “Kin no Shachihoko” (symbol of Nagoya Castle). This is an exclusive traditional Nagoya dance that ends with the pose of the inverted carp or Kin no Shachihoko.

We hope that this article offers you some real insight into what Geisha are and where they come from. Forget about Kyoto! Enjoy a real Geisha performance right here in Nagoya. We’re sure it will remain an experience of a lifetime.

Have you been to a Geisha performance before? Please share your experience, videos or photos and tag us on social media with #nagoyaisnotboring 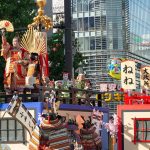